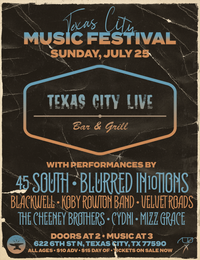 Sasser at Texas City Must Festival!

Sasser heads to Texas City Live to perform at Texas City Music Festival alongside tons of well known local faves! This festival will feature music across multiple genres (rock, country, pop) and will start with some acoustic acts followed by a handful of full bands to finish off the night!!